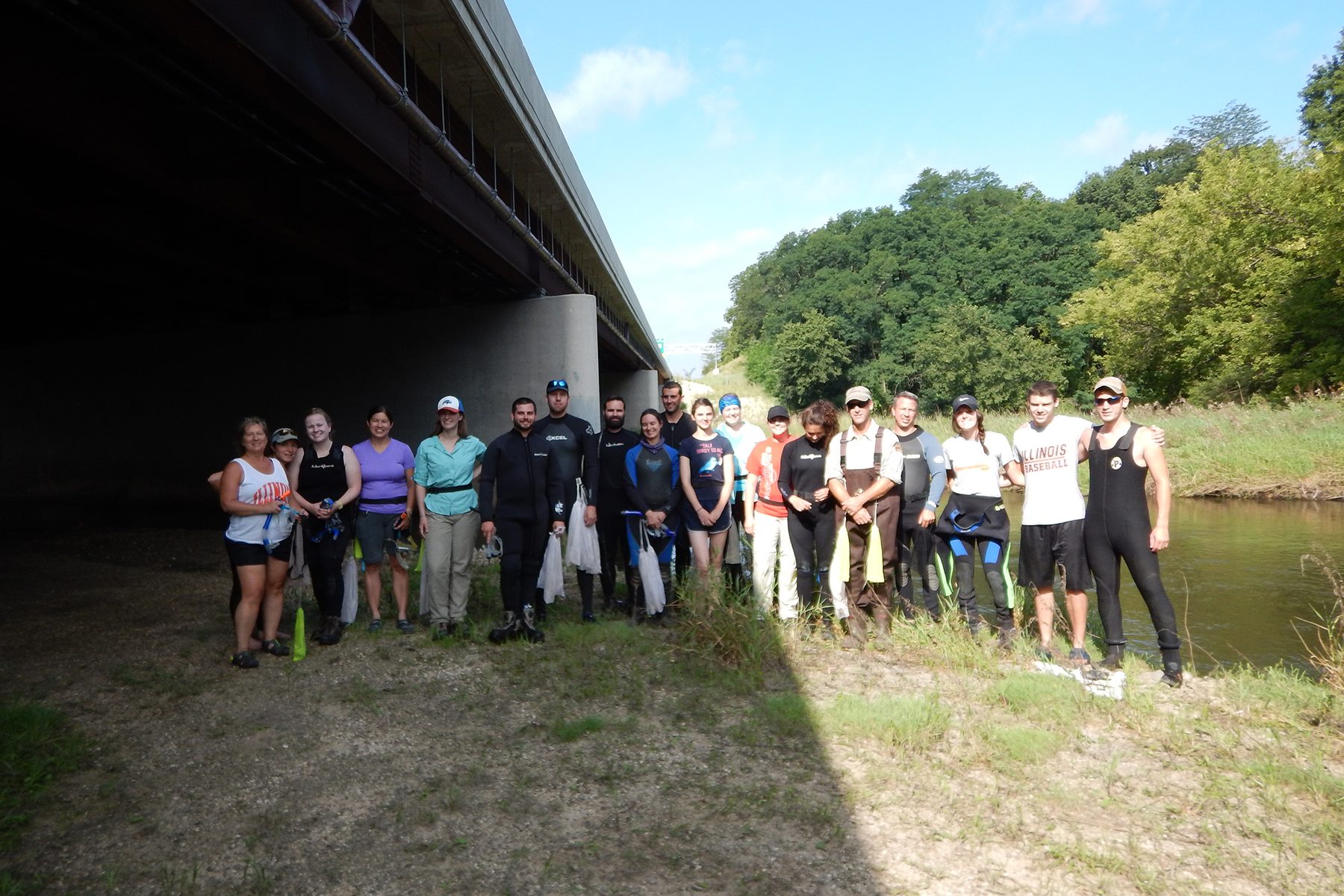 Mussels are often referred to as “the livers of the rivers” because they filter materials from their environment. Freshwater mussels are also among the most imperiled groups of organisms in the world. 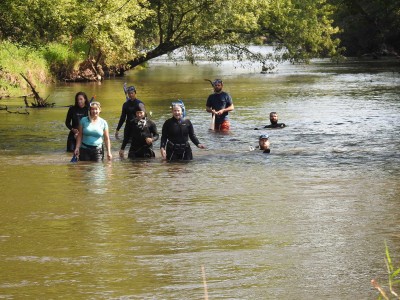 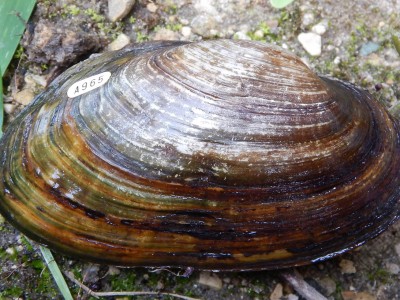 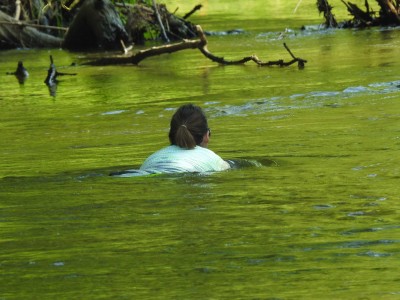 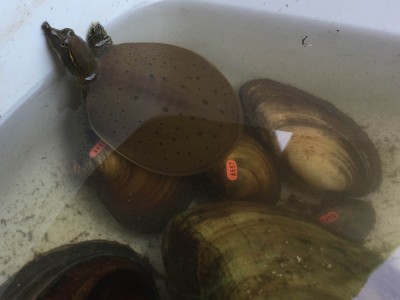 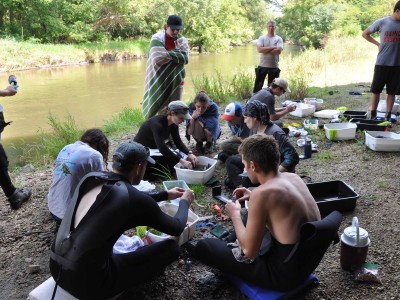 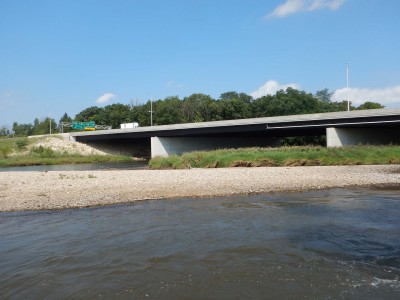 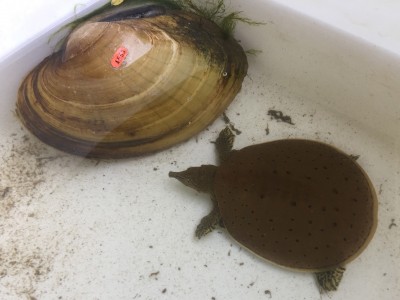 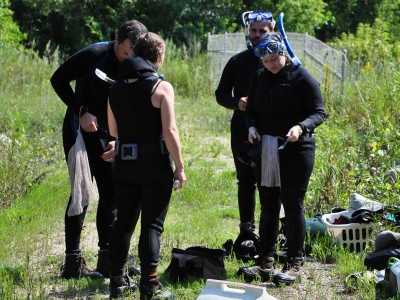 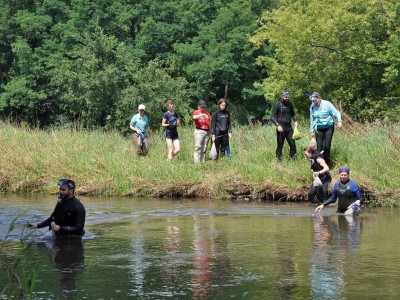 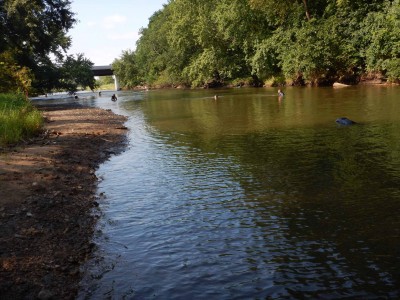 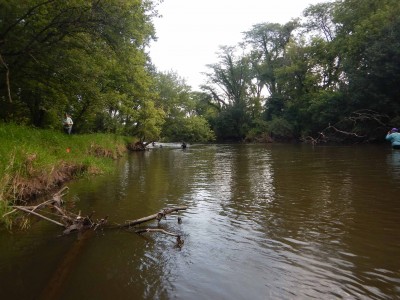 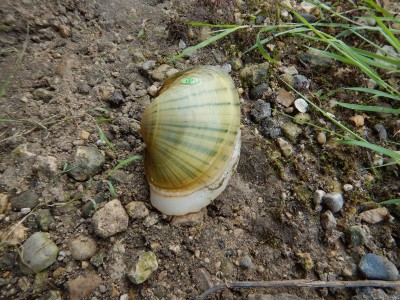 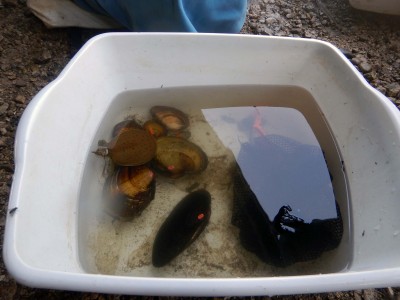 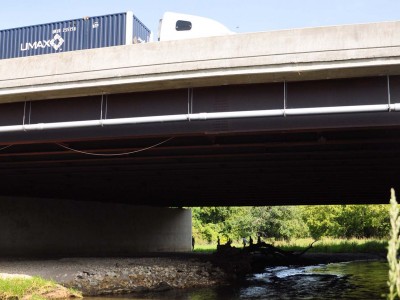 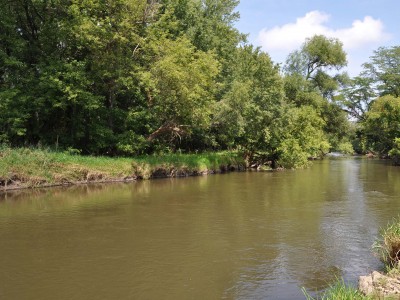 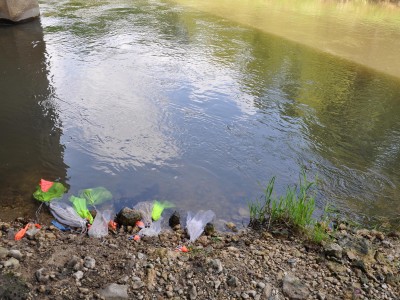 The Kishwaukee River basin in northern Illinois remains one of the most mussel-rich resources in the state. In 2012, the Urban Biotic Assessment Program (UBAP) began studying the fishes, reptiles, amphibians, and mollusks of the Kishwaukee River along the Illinois Tollway I-90 overpass. In 2015 UBAP began a longterm monitoring program of the mussel population at the site. Each August, a team of researchers from INHS, IDNR, and local land management agencies descends on the same location and intensively samples the mussels in the area over the course of a week.

We arrived at the site around 8:30 and began unloading and setting up all of the gear needed for the day. A group of 20 biologists and land managers eagerly grabbed sampling bags, donned wetsuits, waders, snorkels and masks and each claimed their 10m stretch of the river.

When given the signal, we plunged our heads into the swift moving, 70F water to begin locating every mussel we could in our stretches of river and placing them in mesh bags attached to our waists. Much musseling is done by grubbing – shoving ones hands into the sediment and feeling around for mussels, which feel a bit like smooth rocks that hold on in the gravel with a fleshy foot. For some in the group, this was their first time musseling, and finding their first mussels was exhilarating.

After 30 minutes of sampling, we brought our bags of mussels back to the base station. Here, under the bridge with its constant rumble of vehicles speeding by, numbered tags were glued to each mussel. Some of the mussels also had a Passive Integrated Transponder (PIT) tag glued to their shell, which will enable them to be detected in the future without being removed from the river. Malacologists identified, measured, sexed, and aged each mussel before putting it back in its bag to be returned to its place in the river.

We continued these sampling sessions until the entire project area had been sampled. Over the lifetime of this project, thousands of mussels will be marked and measured. Many of the mussels we encountered had been marked in previous years, which will enable the scientists to document growth and survival over time as well as movement within the river.

As we left the site on the last day, we all looked forward to returning next year and hopefully finding those mussels and many new ones.