The Hine’s Emerald Dragonfly (Somatochlora hineana), a dark bodied dragonfly with bright green eyes, is a federally endangered species that lives in spring fed marshes and sedge meadows. The biggest threat to the species is habitat loss and currently the only known populations are in Illinois, Michigan, Missouri, and Wisconsin.

Hine’s Emerald Dragonflies spend most of their life as an aquatic nymph. After 2-4 years, and several molts, the nymph climbs up onto vegetation and molts one final time. The wings unfold and the soft body hardens. While some dragonfly species can be found flying throughout the summer and into the fall, the Hine’s flight season is much shorter. Adults emerge from late June through mid-July.

One bright and sunny day at the end of June, I was able to accompany 2 of the state’s top dragonfly experts, Richard Day and Jim Wiker to one of the few remaining populations in Illinois. Equipped with sharp eyes and binoculars, they are part of a study with Erika Bilger and Dr. Mike Dreslik to design a non-invasive, rapid survey protocol for documenting and tracking populations of this endangered insect.

As the day warmed, dragonflies took flight, often followed by a flock of swallows and kingbirds. Being a rusty amateur dragonfly enthusiast, I pointed out the dragonflies I saw flying and had the professionals identify them, excited at how often my silent identification matched theirs. As my confidence grew, I’d point to a dragonfly and offer a hesitant ID.

A few hours into the day, Wiker spotted a black bodied dragonfly with bright green eyes darting around the wetland and called out “Hine’s!” All eyes turned to where he was pointing. This was my first time seeing a Hine’s Emerald and Day’s first time seeing one in Illinois. Truth be told, I had to trust them because it was moving too fast for me to fully process.

We continued our surveys throughout the afternoon, with Wiker and Day spotting additional Hine’s Emeralds and my eyes and camera missing all of them. Even though we saw at least 14 species of dragonfly, I returned home slightly disappointed, but nothing compared to the next day.

Sitting in my office, the phone rang and Mike Dreslik excitedly told me they were looking at a teneral (freshly emerged, not yet hardened) Hine’s Emerald on a cattail! Dragonflies can’t fly until their wings harden, so they were able to stand back and admire this individual.

Determined to actually see a Hine’s, I returned to the site with them for three days the following week. While most people were enjoying barbecues and fireworks, I was in a wet prairie straining to see every insect zipping by me. On my last day, with temperatures in the 90’s, and the clouds promised by the weatherman non-existent, I thought I might have been hallucinating when Wiker began excitedly pointing out a Hine’s patrolling a small area in front of me. 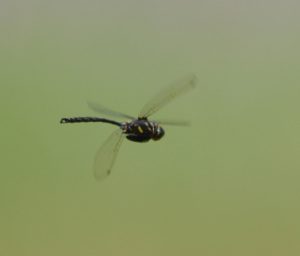 The curious male flew back and forth over his territory, occasionally turning towards me with his bright green eyes. Dragonflies have greater maneuvering ability than a helicopter, quickly changing direction and zipping off to your right only to return from your left. I watched this dragonfly on patrol, he chased off other intruding dragonflies including another Hine’s emerald! We even had a Hine’s Emerald female fly through the site!  I continued to watch the male patrol until it was time to move to our next site.

The team completed 126 surveys for Hine’s Emerald Dragonflies over a three week period. Sadly, they only found Hine’s during approximately 19 surveys and many of those surveys had only one individual. Despite the low abundance of Hine’s Emeralds, the site still had a variety of dragonflies, including:

UBAP staff Dr. Michael J. Dreslik and James R. Wiker received funding from the Forest Preserve District of Will County to survey for the State Threatened Eryngium Stem Borer (Papaipema eryngii). The survey focuses on the sand prairie forest preserves in western Will County. To date, surveys have documented the presence of the moth at two of the three sites surveyed.

On July 18th, an in the field training session on identification and survey methods for the larvae of the species. During the training session Will County staff were provided hands on training and instruction and readily found two individuals. 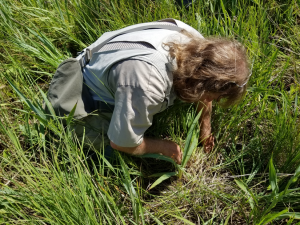 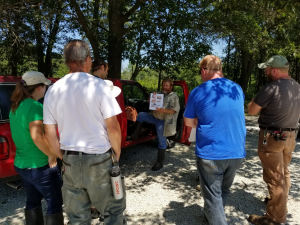 “We now know that eDNA is going to be a really worthwhile tool – at least for aquatic species in difficult-to-access habitats,” Niemiller said. “You could go to a spring outflow, take a water sample, and see what you might detect there with a limited outlay of labor, time and money.”

Read the complete article at the Illinois News Bureau